Word analogy task has been one of the standard benchmarks for word embeddings since the striking demonstration of “linguistic regularities” by Mikolov et al. (2013) 1. Their big finding was that linear vector offsets seem to mirror linguistic relations, and can be used to perform analogical reasoning.

For example, consider a pair of words a : a' :: b : b such as man: woman :: king : queen. Mikolov et al. proposed that the b' word could be found with the help of the offset between the word vectors b and a. In this case, the word vector queen should be the vector that is the closest to the result of calculation king - man + woman.

Mikolov et al. demonstrated their findings on the Google analogy dataset, which consists of 9 morphological and 5 semantic categories, with 20-70 unique word pairs per category: 8,869 semantic and 10,675 syntactic questions in total. However, this set was unbalanced, and some categories were overrepresented (particularly the country:capital relation constituted over 50% of all word pairs in the semantic category). Gladkova et al. (2016) proposed BATS (The Better Analogy Test Set), which covers eaqually derivational and inflectional morphology, as well as lexicographic and encyclopedic semantics. Each of these relations consists of 10 categories and each of the categories is being represented by 50 unique word pairs giving a total of 99,200 questions 3 for the vector offset method.

jBATS was structured to be:

jBATS was initially used to evaluate the performance of the subcharacter and character level models in Japanese 6. These models take advantage of the information in Chinese characters - kanji (SG + kanji) and their components, called bushu (SG + kanji + bushu). The overall performance of both models was compared with the traditional Skip-Gram model (SG) and FastText. 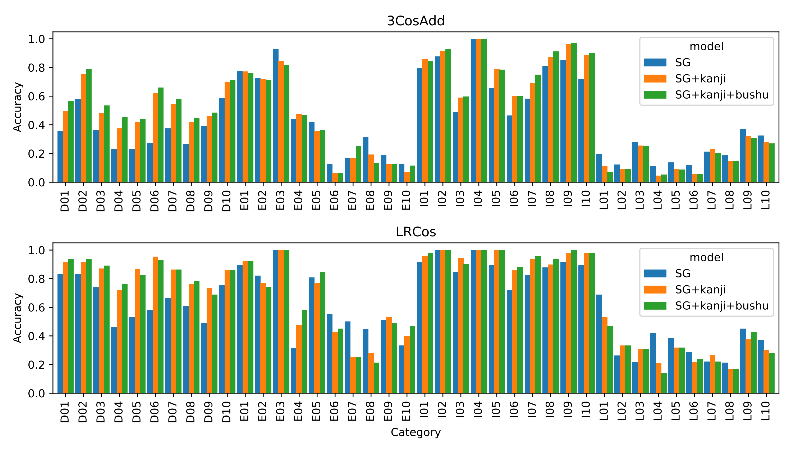 Including the bushu information has proven to be beneficial especially for the inflectional and derivational relations, where most tokens were written using a single kanji or a kanji affix, related to the word meaning. The smallest improvement was observed for the lexicographic semantics categories, where traditional Skip-Gram model performed better in most cases. Semantic relations were also the most difficult to capture, which is consistent with the finidings for English in Gladkova et al. (2016) 2 and Drozd et al. (2016) 4. Moreover, the LRCos method 4 yielded overall better results than 3CosAdd achieving up to over 36% better accuracy, which was also shown for English in Drozd et al. (2016) 4. The overall accuracy on word analogy task (LRCos method) of all the models (including FastText) for different corpus size can be found in Karpinska et al. (2018) 6

The abstract of the original paper has a mistake: the total number of questions in BATS is 99,200.

Karpinska, M., Li, B., Rogers, A., & Drozd, A. (2018) Subcharacter information in Japanese embeddings: when is it worth it? In In Proceedings of the Workshop on Relevance of Linguistic Structure in Neural Architectures for NLP (RELNLP) 2018, to appear. ACL, 2018.